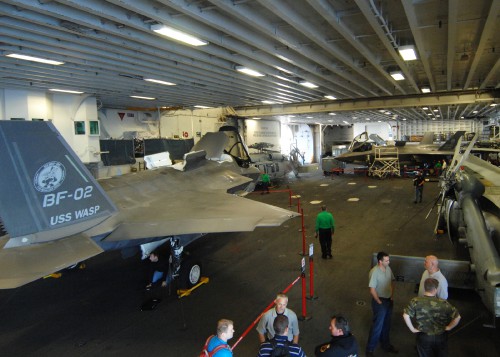 F-35B STOVL aircraft BF-02 and BF-04 in the below deck hangar of the USS Wasp. Photo by MC1 Tommy Lankin, USN.

On October 3rd, 2011 a new chapter was written in US Navy and Marine Corps history with the first successful Vertical Landing of F-35B aircraft BF-02 as it touched down on the USS Wasp (LHD 1) at 3:11 pm local time. The aircraft was piloted by Lt Col Fred "Tinman" Schenk, USMC, who flew BF-02 from NAS Patuxent River, Maryland to the USS Wasp.

BF-02 and BF-04 operated on the ship for a total of 19 days. The F-35Bs completed all of their test points and the additional NAVSEA environmental test points and left the USS Wasp for the final time during this trial period on October 21, 2011.

During their deployment, BF-02 made 21 flights and BF-04 flew 12 during the trials. In total, 72 STOs and 72 VLs were completed. On October 16, BF-02 and BF-04 completed a combined 14 STOs and VLs, the most in a single day while aboard the Wasp. This trial period focused on initial shipboard operations, including STO flying qualities, performance tests, VLs to spots 7 and 9, and external environment effects on the LHD. Stern to bow crossings, repeated VLs to a single spot with intervals encountered during carrier qualifications, and initial deck and hangar operations (taxi, towing, tie down, refuel, elevator) were also accomplished. Two additional sets of sea trials are planned, during which the F-35B’s mission systems, weaponry and ability to operate during night will be tested.