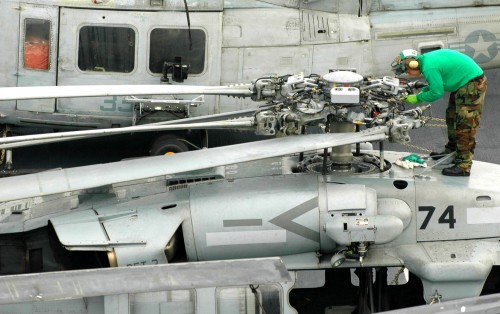 A Navy airman scrutinizes the rotor head of a SH-60S Seahawk helicopter prior to flight operations on the flight deck of the amphibious assault ship USS Peleliu (LHA 5) as the ship operates in the Pacific Ocean on Dec. 1, 2005. DoD photo by Petty Officer 2nd Class Zack Baddorf, U.S. Navy. (Released) Source: http://archive.defense.gov/photos/newsphoto.aspx?newsphotoid=7381


Learn more about the Sikorsky SH-60S at Vertipedia.