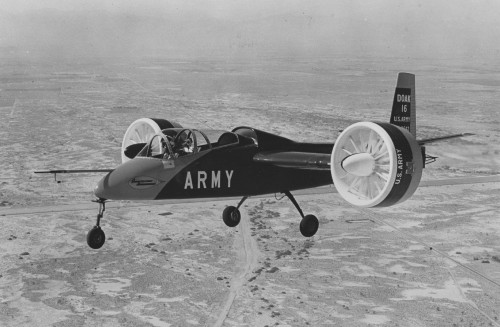 FIRST CROSS-COUNTRY FLIGHT BY A U.S. VTOL AIRCRAFT is made by the Doak 16 -- Army VZ-4DA, a vertical take-off and land research airplane designed, constructed and tested by the Doak Aircraft Co., Inc., of Torrance, California, for the U.S. Army Transportation Corps. Ducted fans mounted on the wing-tips rotate through ninety degrees, point straight up for vertical flight like helicopter, turn straight ahead for high speed, long range forward flight like conventional airplane. Here the Doak 16 is shown with ducts forward in flight across California desert. U.S. Army today announced acceptance of Doak 16 on completion of flight test program, and scheduled first public and press demonstrations at joint meeting of Institute of Aeronautical Sciences and American Helicopter Society in Washington, D.C. Also announced was new contract with Doak for flight evaluation program under joint auspices of Army, Air Force, and National Aeronautics and Space Administration.

Added to Doak Aircraft Co., Inc. V... and categorized in Aircraft/Overviews — 5 months ago