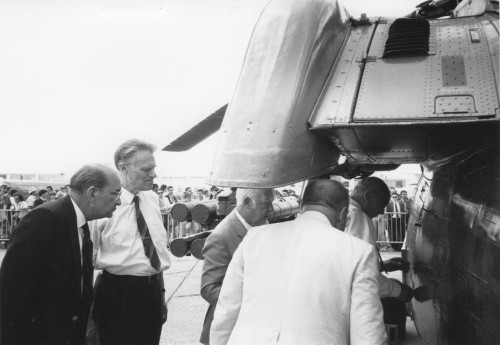 AHS leadership meets Mil Design Bureau leadership and gets a tour of the Mil Mi-28 at the Paris Air Show in June 1989.

Unlike the Mi-24, which has a large troop-carrying capacity, the Mi-28 is configured for crew space only, much as the MDHC AH-64 Apache and Bell AH-1 Cobra are designed. The Soviets may have learned the value of a second aircraft, like the Mi-24 to pick up downed crew members in Afghanistan. There is a compartment door under the left wing for access to electronic equipment and emergency room for three. Space could also be used to store extra equipment.