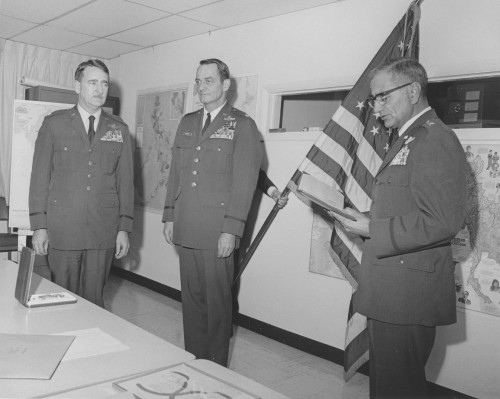 Lt. Col. John M. Slattery, USAF, joined AHS in 1965 and was an active member of the Federal City Chapter. He was awarded the Legion of Merit for service as deputy chief of staff of helicopter operations, Air Force Advisory Team Two, Nha Trang Air Base, Vietnam, from June 5, 1971, to June 10, 1972. After his return to the U.S., he received a second Distinguished Flying Cross, 11th through 14th clusters to the Air Medal, and two Gallantry Crosses from the Vietnamese for missions flown in the Pleiku/Kontum area during the invasion of Military Region II. The image depicts Lt. Col. John Slattery, center, flanked at his right by presenter Col. P.B. Van Brussel and by Brig. Gen. Louis W. La Salle, reading the citation. From Vertiflite, March/April 1974 (page 35).