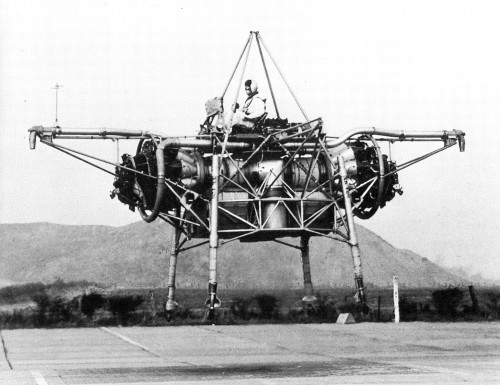 The Rolls-Royce Flying Bedstead was the world’s first jet powered VTOL aircraft. First free hover was on 3 August 1954. It was the first pure jet (manned and untethered) VTOL machine to take to the air successfully, to a height of 13 to 15 feet. Piloted by Ron T. Shepherd, chief test pilot for Rolls-Royce, the 7,196 lb craft was called the Rolls-Royce Thrust Measuring Rig (or TMR), but is better known by its unofficial name of the Flying Bedstead (Serial Number XA314). The TMR was the first manned untethered VTOL machine that used jet lift for free hover. From "Golden Anniversary for VTOL" by Erasmo Piñero, Jr. Vertiflite, Fall 2004 (page 50).