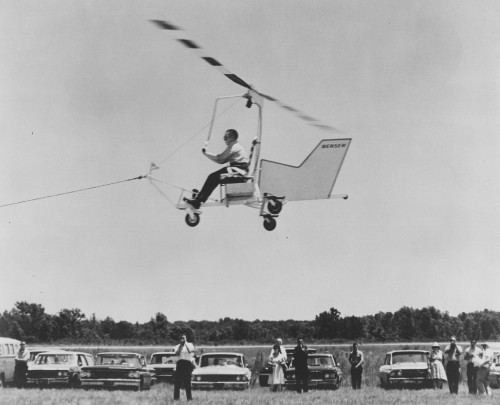 Raleigh, N.C. - World's youngest pilot on record to solo an aircraft was honored by the Popular Rotorcraft Association during its annual convention held here recently. J.C. Lewis of Marshall, Texas, aged 11, received a trophy as the "Junior Champion of the World" after demonstrating his flying skill before some 700 PRA ebers and guests who convened at Raleigh-Durham Airport from 27 states and 5 countries.

Flying a home-built gyro-glider, an engineless helicopter, the junior champ swooped up and down with the ease of a bird while being towed by a car driven by his father. To further demonstrate his skill, he gave rides in his 2-seat Whirlybird to other pilots who gathered to witness the event.

Asked by the reporters if he had difficulty learning to fly, he declared, "I found it easier and safer to fly than to ride a bicycle".

Added to Historical Records - Bens... and categorized in Aircraft/Rotors — 2 years ago