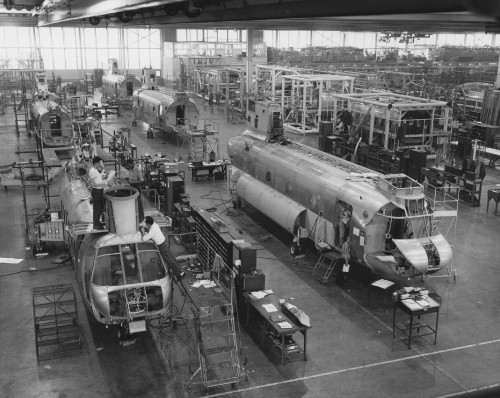 Production of first twin-turbine Boeing Vertol helicopters moves into high gear at the Boeing company's Vertol Division plant, Morton, Pennsylvania. On the left are two Boeing Vertol 107 transport helicopters. On the right are the first three YHC-1B Chinooks for the U.S. Army. Both aircraft are twin-engine tandem-rotor helicopters. The YHC-1B is the larger of the two. Its maximum gross weight 33,000 pounds and its fuselage length is 51 feet, compared with the 18,450 pounds normal gross weight and 44-foot-7-inch-long fuselage for the Boeing Vertol 107. The U.S. Navy recently announced that the Boeing Vertol 107 had won a competition for a U.S. Marine light assault transport. Earlier, the Chinook was selected by the Amy after a design competition for a helicopter able to carry three tons of payload on 100-mile radius Army missions under hot-day conditions and more than seven tons maximum payload. The Army has since ordered a total of 28 Boeing Vertol HC-1B Chinooks, with the first five designated YHC-1Bs to denote their role as development aircraft. The Chinook is powered by two 2,200-shaft-horsepower Lycoming T55 turbines, giving it a cruising speed of 150 miles per hour. The Boeing Vertol 107, powered by General Electric T58 gas turbines of 1,250 shaft-horsepower each, also has a 150-mph cruising speed. At normal gross weight, the Boeing Vertol 107 can carry 25 passengers or more than two tons of cargo. In addition to the 10 Boeing Vertol 107s ordered by New York Airways, 10 have also been ordered by Kawasaki Aircraft Company, the firm licensed to produce the 107 in Japan. Both the Chinook and the 107 have straight-in rear loading ramps and production sealed fuselages, giving built-in flotation capability that makes it possible for them to land in water. Delivery of both types will begin later this year.

Added to Historical Records - Boei... and categorized in Manufacturing — 2 years ago